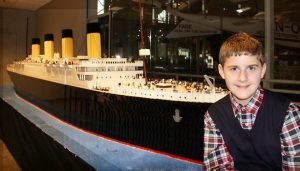 Meet Brynjar Karl Birgisson, the “LEGO boy” who made headlines when he built a replica of the Titanic out of LEGOS. Birgisson’s masterpiece is the world’s largest replica of the famous ship. But that’s not the only thing amazing about Birgisson.
He built his replica when he was just 10 years old. The now 17-year-old, who is on the autism spectrum, spent over 700 hours over the course of 11 months to complete his vision. The model has 56,000 LEGO bricks, but more impressively, Birgisson says the project was his “lifeline to independence.”

After a trip to Legoland, the Iceland native was inspired to create his own replica like the houses and ships he saw made out of LEGOS. After lots of research, he landed on making the Titanic. The dream didn’t come without it’s obstacles. Birgisson said there were many frustrating moments building the model. But he continued to work on it with encouragement from his grandfather and mother. His engineer grandfather helped him estimate the number of LEGO bricks needed to create the model and also helped him create a blueprint to finish the project. His mother helped him order LEGOS and find a location big enough to build the large scale model on.

Since completing the model, Birgisson’s LEGO Titanic has traveled to several countries around the world. Since October 2019 the model has been on display at the Titanic Museum Attraction at Pigeon Forge in Tennessee. It will remain there until the end of 2020.

The LEGO project has been viewed by thousands across the world, but it’s the personal impact on Birgisson has been the most important part of the endeavor. He says it has helped him overcome obstacles with autism. Birgisson says in building the model he was able to gain confidence and learn how to communicate better. Now the teen has become an outspoken advocate for autism.

Birgisson has given a TEDx Talk and written a book with his mother called “My Autistic X Factor,” inspiring many. Most recently, Birgisson is featured in the documentary “How the Titanic became my lifeboat.” The film was scheduled to premier in April, but due to COVID-19 it has been delayed.